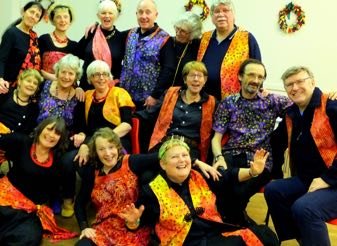 We were founded in 1994 by John Low, a York-based singer and musician who spent his early years living in Kenya and wanted to form a group singing the songs he grew up with and loved. Since then John has moved on (although we’re very happy he comes back to join us from time to time) but traditional African rhythms and songs still form the core part of our repertoire. In addition to this core we have, over the years, collected, performed and recorded songs from all over the world and just about every continent. Our current list includes songs from Bulgaria, Georgia, Macedonia, China, France, Finland, Israel, Hawaii, New Zealand, Columbia and the Amazon. We also have a fair sprinkling of spirituals and gospel music from the Southern States as well as the odd political number and sometimes just songs we like that don’t fall into any particular category.

How do you do that?

We always sing in the original language and try to capture something of the spirit of the song using movement, actions, percussion, drumming, calling and plenty of ululation (high-pitched trilling). One question we get asked a lot is “How do you remember the words?” Well, the answer to that is practice, practice, practice... mostly parrot-fashion using any mnemonics we can... eventually they go in! Our songs can be about anything from harvesting to unrequited love to the freedom struggle so explanatory introductions are an essential part of our performances too. We like to spread these around choir members, giving audiences a chance to know individuals in the group a bit better.

Where do we sing?

We have performed in concert halls, village halls, churches, cathedrals, abbeys, amphitheatres, ruins, campsites, barns, pubs, parks, gardens, train stations, streets, shops... in fact we can break into song just about anywhere whether asked to or not. We’ve sung at many UK folk and world music festivals including Bromyard, Towersey, Warwick, Off the Tracks, Beverley, Musicport, Bridlington and Otley. We’ve also performed at the Plozovet Festival in Brittany and spent a week in Darmstadt and Dresden where we produced our CD “Chechelele Live! Tour of Germany” We appeared at the Edinburgh Fringe in 2015 and 2016 where we did well-received concerts in the Surgeons Hall and fun busking spots on the Royal Mile.

Who asks us to sing?

We have performed at the request of many, many different people and organisations in many different places ranging from festivals to weddings to charity fundraisers to Heritage open days. We sang in the street at the behest of the Tour de France organisers and flash-mobbed cafe-goers for York’s 1900th birthday celebrations. Sometimes we organise performances ourselves, such as when we hosted the magnificent Cuban choir Musica Aurea and did a joint fund-raising gig for them in a local York church.

What else can we offer?

We both host workshops and run them ourselves from time to time. On many occasions we have booked well-known workshop leaders for a day of singing and invited local choirs and individuals to join us for the day. In the past we have ourselves run workshops for schools, other choirs and at festivals as part of a performance package. We teach rounds, simple harmony songs and movement as well as performance numbers for more experienced singers.

What do we charge?

Our fees are negotiable and for some charitable gigs we may not charge at all apart from transport expenses. We operate on a non-profit basis, with all fees and proceeds going to cover travel and other costs, the remainder being donated to charities operating in the areas of the world from where our songs originate.

Email Us
Design By
Edit